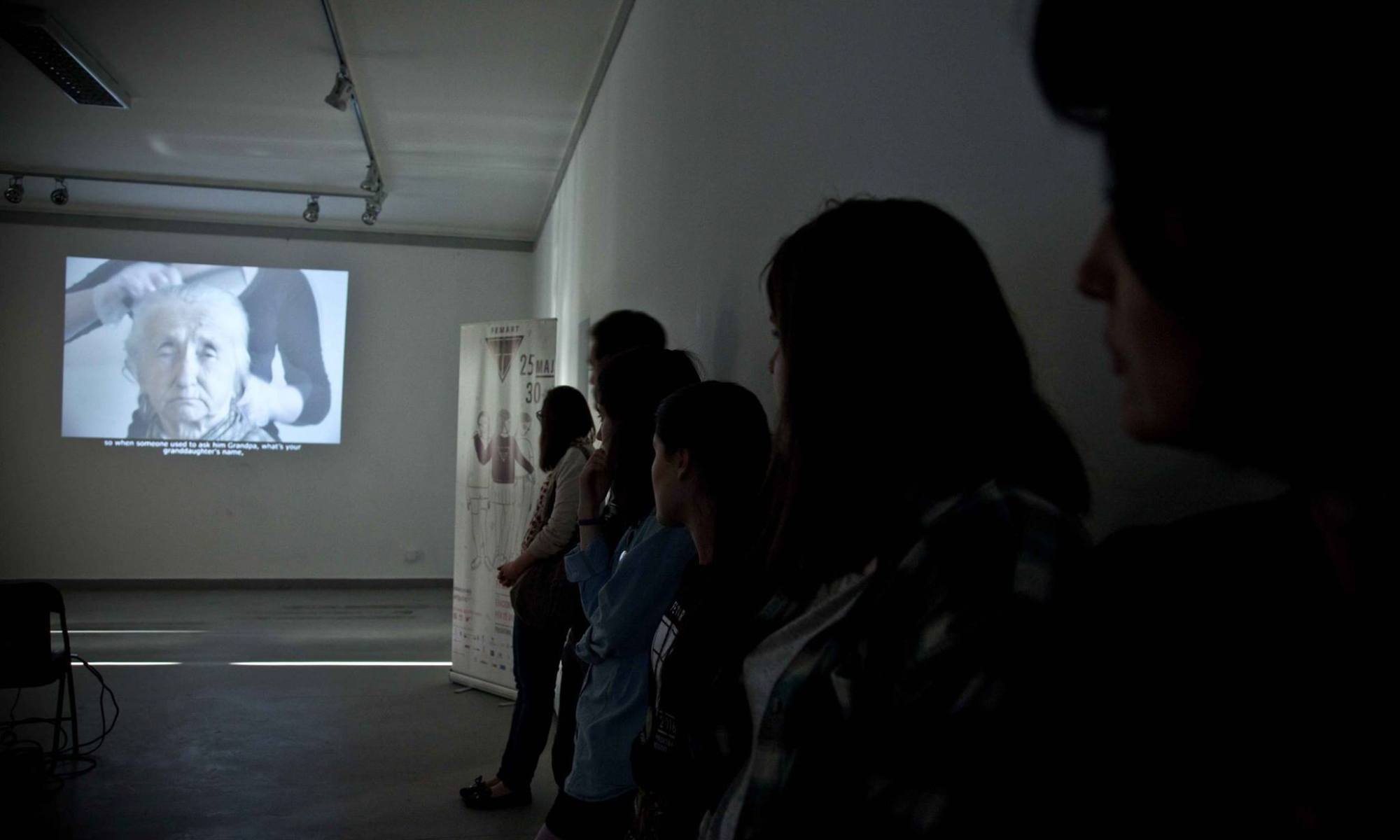 Femart presented a series of pieces at the gallery at the University of Prishtina’s Faculty of Arts, leading the public through different spaces in turn. The exhibition began with a heavily requested reprisal of Fitore Berisha’s dance piece “Revolt Against Violence,” interpreted by performers Agnes Nokshiqi and Tristan Halilaj. “Revolt Against Violence” is a love story that quickly takes a dark turn. Our two protagonists discover one another through tenderness and move in unison through their embraces. It’s gentle until it isn’t, and Halilaj violently overpowers Nokshiqi. An allegory on the ways in which the people who love us can also be the people who try to destroy us, the narrative resolves itself with Halilaj’s restrainment in Nokshiqi’s [literal] rope. In its simplicity, “Revolt” is a call for rebellion against abuse, particularly abuse exercised in the name of love.

We are then ushered into the next space of the gallery, where video artist Adela Jusic’s 2011 piece “When I Die, You Can Do What You Want” is screened. The entire video is a single shot of Jusic gently applying die to her grandmother’s hair while narrating stories from her life. In a whisper, Jusic speaks in her grandmother’s voice, talking about war, poverty, corruption, hatred – but also love for her children, her husband and her neighbors. The all too ordinary difficulties of her life are made intimate and immediate. Jusic’s grandmother serves a stand-in for all the grandmothers of this world who witness war, death and their families growing apart. Their wisdom is quiet and seldom asked for, and we feel that wisdom here, while watching an old woman get her hair dyed. Jusic’s position is that of an oral historian of sorts, sifting through forgotten stories of subjects that are usually ignored in official historical narratives and reproducing them as best as possible.

A screening of “When I Die, You Can Do What You Want” by Adela Jušić. Photographer: Majlinda Hoxha

After the darkness of the screening, the public is lead into the sunshine of a Prishtina afternoon. The dusty little cabin that stands (normally unused) in front of the gallery has had an old fashioned rotary phone set up inside. Designer and visual artist Zymryte Hoxhaj encourages us to go inside and pick up the phone, a part of an audio-installation titled “Babi pse brengosesh” (Father why are you worried). A tinny melody is playing when I put the receiver to my ear, but I can’t put my finger on what I’m hearing. It’s definitely Albanian, it’s definitely old, and definitely patriotic, with a young girl singing the lyrics: “Babi pse brengosesh, kur unë jam krenare që jam bija jote, e që jam shqiptare” (Father why are you worried, when I’m proud that I’m daughter, and that I’m Albanian). The song, of course, is a Sinan Vllasaliu hit from the 1990’s, in which the beleaguered Sinan is given strength by his daughter, Edona, to resist the Serbian regime in Kosovo. The words “e që jam shqiptare” (and that I’m Albanian) are repeated, and the tension between politics of resistance and gender roles are hinted at in a tongue and cheek way. One of Hoxhaj’s previous projects was a documentary film (Smajl) on her family’s journey from Kosovo to Germany – the conflicting ways in which gender, sex, and nationhood are negotiated in the Albanian diaspora are issues she’s already explored at great length. This audio-installation, with the rotary phone booth and the voice of Vllasaliu’s young daughter proudly identifying with her father and the Albanian nation, push us to think about these emotionally laden negotiations.