The work has won the Special award of the 54th October salon, Belgrade

Ride the Recoil was developed with technical support by Ervin Prašljivić and Ognjen Šavija, and published as part of Triple Canopy’s Internet as Material project area, which receives support from the Andy Warhol Foundation for the Visual Arts, the Brown Foundation, Inc., of Houston, the Lambent Foundation Fund of Tides Foundation, the National Endowment for the Arts, the New York City Department of Cultural Affairs in partnership with the City Council, and the New York State Council on the Arts. Ride the Recoil developed as an outgrowth of Perfect Strangers, a series of public programs Triple Canopy organized in Sarajevo, Bosnia and Herzegovina, in June, 2012, with support from CEC Artslink.

Triple Canopy is an online magazine, workspace, and platform for editorial and curatorial activities. Working collaboratively with writers, artists, and researchers, Triple Canopy facilitates projects that engage the Internet’s specific characteristics as a public forum and as a medium, one with its own evolving practices of reading and viewing, economies of attention, and modes of interaction. In doing so, Triple Canopy is charting an expanded field of publication, drawing on the history of print culture while acting as a hub for the exploration of emerging forms and the public spaces constituted around them. Triple Canopy is a nonprofit 501(c)3 organization.

Work is based on drawing criticism to recently released video game Sniper Ghost Warrior 2. The first person shooter video game, set in besieged Sarajevo, features American snipers who defend the city from an attacking army and presents a historical corrective. Year 2013, operation Archangel has a big task – to provide evidences of genocide, so the NATO can make an action. After collecting evidence of genocide, American soldier kills Marko Vladić (obviously  Ratko Mladić*) and puts a stop to the suffering of besieged citizens. “Justice for the ghosts of Sarajevo”, says a character at the end of this part of the game.

*Ratko Mladić is a Bosnian Serb former military leader accused of committing war crimes, crimes against humanity and genocide. On 31 May 2011, Mladić was extradited to The Hague, where he was processed at the detention center that holds suspects for the International Criminal Tribunal for the former Yugoslavia. His trial formally began in the Hague on 16 of May 2012.

(…) Ride the Recoil sound installation is perhaps the best sited work in the whole exhibition. For over a year now, the artist has been working up a research and criticism of the video game Sniper: Ghost Warrior 2, which is set in Sarajevo. Relating programmatically to her earlier work The Sniper, this piece moves beyond the deeply personal narrative of that video piece, towards a critique of those who would concrete over such memories with commodified falsehoods. In a cold, bare, abandoned side room, its windows with a claustrophobic view of a tight courtyard, this is an incredibly powerful work.

Along the back wall, sequential images of a child in red shorts – successively larger as though we are homing in on her through the sights of a sniper rifle. As we observe these images, the “instructions” on how to play the video game effectively are relayed through two speakers, just at a pitch to be insidious and uncomfortable. The overall effect is quite chilling, as the visitor processes the multiple gaps between personal memories of that siege and the commercial ficition now offered for sale by a global corporation. The callousness of the computerised female voice, giving the gameplayer instructions of how to kill more effectively, set against the very human surveillance images of a small child, can’t help but provoke feelings of anger in the viewer; the flattening of the worst suffering into a dehumanised, pixellated game environment for the desensitised consumer; with, at best, an indifferent shrug from the game’s producers when called to account for their product (…)

Jonathan Blackwood in No one belongs here more than you do, 54th October Salon, Belgrade, 2013
Read the full text here

Adela Jušić’s Ride the Recoil approaches the brutal and deadly violence as a traumatic experience, which has to be re-worked again and again by the memory of an individual as well as a social collective process. She overdubs the narrative of a video game, a so-called ego-shooter with her own voice, staging a sniper-figure in his deadly profession, and combines the audio-track with a series of photographs of a little girl leaving a gate. 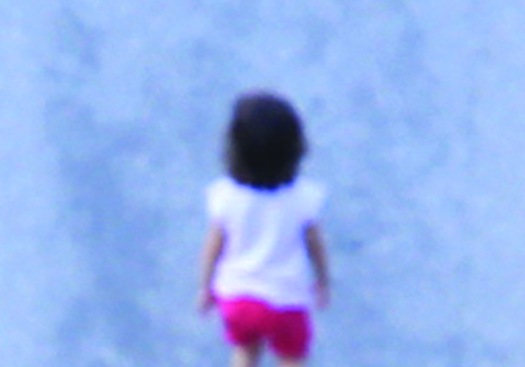