There is no doubt that contemporary art in Sarajevo is developing in a new and positive direction, with plenty of eye-catching initiatives having been unveiled since the beginning of the summer. Visitors to the city will soon have three re-vitalised spaces in which to see the wide range of contemporary art practices taking place; from Duplex 100 m2’s Kupujmo Domaće exhibition, to the re-opening of the critically important Čarlama Gallery in Skenderija on August 11th. But perhaps the most noteworthy development is the emergence of a new space for contemporary art in the city’s Baščaršija, Gallery Brodac, brainchild of the young artist and cultural entrepreneur, Mak Hubjer.

Whilst citizens have now become used to the re-constructed Vijećnica, the fate of the old Sarajevo city jail, across Brodac street, has been much less certain. The block housing the old cells and administrative buildings remains shabby and in desperate need of renovation, looking out of place alongside Karl Paržik, Aleksandar Wittek and Ciril Iveković’s hallucinogenic neo-Moorish masterpiece.

The new gallery occupies a space in this old city jail building, which was at one time home to the likes of Gavrilo Princip, and captured Communist and anti-Fascist activists during the occupation of 1941-45. The grim history of this space and its present status provide inspiration for some of the artists shown in Hubjer’s first exhibition, entitled Contemporary Refresh.

This is certainly no white cube gallery space. At one time, current research indicates, these rooms were used as a stable for the prison service’s horses. It has bare brick walls; concrete and plaster block up an old doorway. There is no electricity or running water. The gallery has been renovated to the extent that it is possible to mount an exhibition, but there are no plans to renovate it fully; merely to maintain it in a state where art can be shown, discussed and, perhaps most importantly, bought.

What is remarkable about this exhibition is the sheer range of artists on display, a very reliable reading of the quickening pulse of visual art in Sarajevo. Artists who are rarely seen in shows together, rub shoulders in easy familiarity here. This exhibition offers a tempting glimpse of what a united Sarajevo art world could achieve by working together.

Quite properly, for an opening exhibition, there is something for visitors of all tastes to enjoy. A particular early highlight is the work of Pierre Courtin, better known as a curator but here exhibiting as an artist in his own right; visitors can enjoy one of Pierre’s trademark pop art-inspired collages, based on contemporary events and headlines.

The paintings of Dženan “Cviki” Hadžihasanović echo the artist’s current show at Collegium Artisticum. His dark views of a generalised urban protest, with the individual figures blurred into one another, offer a long-lens shot of the standard forms of protest; the specificities of the message are less important than the general current air of unease, and unrest, in geo-politics. The air of un-choreographed performance in these images marks a link between Hadžihasanović’s paintings and his supporting roles in the performances of Jusuf Hadžifejzović. Alongside Hadžihasanović’s work, there is a rare opportunity to see an action painting by Edo Vejselović.

The last two winners of the ZVONO award for young Bosnian-Herzegovinian artists are also featured. Selma Selman contributes a square mosaic-type installation of gold and white tin lids, each inscribed with hand written messages that range from the humorous to the dark.  Nina Komel, meanwhile, offers us two neat separate installations reflecting on geographical space and identity, and the visual legacies of twentieth century modernism.

These works are all visible in Brodac’s main space; there is a decidedly focused political and site specific flavor in the second space, darker and perhaps more difficult to hang work in. Strong works are required to make this smaller space effective, and these are provided by Adela Jušić and Lana Čmajčanin.

Jušić offers a new, developing site-specific project entitled I am a Communist and that’s all I ‘ll ever tell you. The project grows out of her long-standing research into anti-fascist women’s organisations from the 1941-45 occupation, and the fate of individuals involved in it. This particular work focuses on Radojka Lakić, who was imprisoned in this building when it was run by the Ustaše; it records the fate of many who were murdered or tortured in this place during that dark period in Sarajevo’s history, and their individual names. Fascist occupiers murdered Lakić herself in September 1941, after a period of severe torture.

The basis of this work was found in Mila Beoković’s 1967 book “Women Heroes”, which features Lakić’s story. This is a complicated and multi-layered installation, featuring a replica of a handkerchief (maramica)  belonging to the partisan Rada Nikolić from Bijeljina. On this handkerchief, Nikolić embroidered the surnames and initials of her friends and comrades who were executed in the Banjica concentration camp.

This work, in addition to conveying a sense of defiance and a refusal to be intimidated, as well as a stoic acceptance of fate, and the consequences of individual choices in a time of life-or-death political struggle. Seen from the vantage point of 2016, Jušić is keen to ensure that these stories continue to be told alongside the more familiar narratives of incarcerated males such as Princip, or the Mladi Muslimani; it is a work closely and poignantly related to this space which she will continue working on in future.

On the opposite wall, meanwhile, is a self-portrait of Lana Čmajčanin. The artist’s familiar gaze meets that of the viewer unswervingly; her face is traced and overwritten by a network of hatched cartographic lines. This portrait relates programmatically to the work done recently by the artist on the related themes of identity, nation, gender and social scripting.

Whilst much contemporary political discourse attempts to flatten out the interesting dissonances and problems in national, cultural and gender identity, Čmajčanin’s work attempts to reveal such seemingly straightforward “truths” as hollow, empty and capable of manipulation to suit the particular political or social imperatives of the day. Moreover, this is a portrait which attempts to show identities not as fixed, or pre-determined, but as complex, layered and as part of a process of continual evolution and development, rather than as a fixed, unchanging set of clichéd “certainties”. This artist’s work insists on the shaping of our current identities as active citizens and people, of identities as a sum of human qualities shaped by social processes, rather than as a set of moronic ethno-religious bullet points handed down to us by the political classes.

Many who observe the development of contemporary art in this country despair that it runs on little more than enthusiasm and independent initiative. This show, and the emergence of this new gallery space, offers a counterpoint to this pessimistic outlook.  This is a strong debut for a gallery space that seems set fair to offer a lively programme of exhibitions both from B&H artists, and invited shows from abroad.  Long-term plans are in place for Brodac to ensure that it continues in a sustainable fashion.

The gallery is quite rightly highly ambitious; unapologetically seeking to make new connections within the local art world, based on its strengths, and aspiring, over time, to help grow the active marketplace, that will guarantee art production’s future in this city. A key element in this strategy is the space that it offers to emerging new artists to present their work for the first time, and to learn from working alongside more experienced peers.

This interesting new space has little patience for the old factionalised rajas, instead demanding that artists and art workers come together to work for a better future for all. This combination of an ambitious forward programme, an ability to make relationships work, and a steely commercial focus, all combine to make Gallery Brodac worthy of the closest scrutiny and encouragement in the months ahead. If Brodac continues in the way that it has started, then it cannot be anything other than a very valuable new landmark in the topography of contemporary art in Bosnia and Herzegovina. 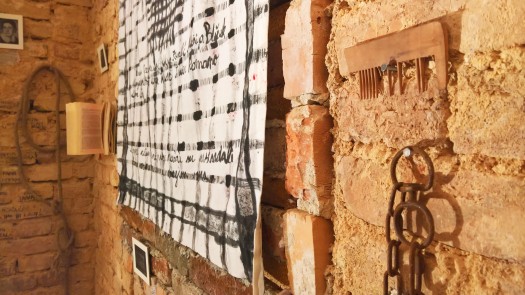 I am a Communist and that’s all I ‘ll ever tell you, exhibition set up, Contemporary Refresh, Gallery Brodac, Sarajevo, 2016

More about this work here