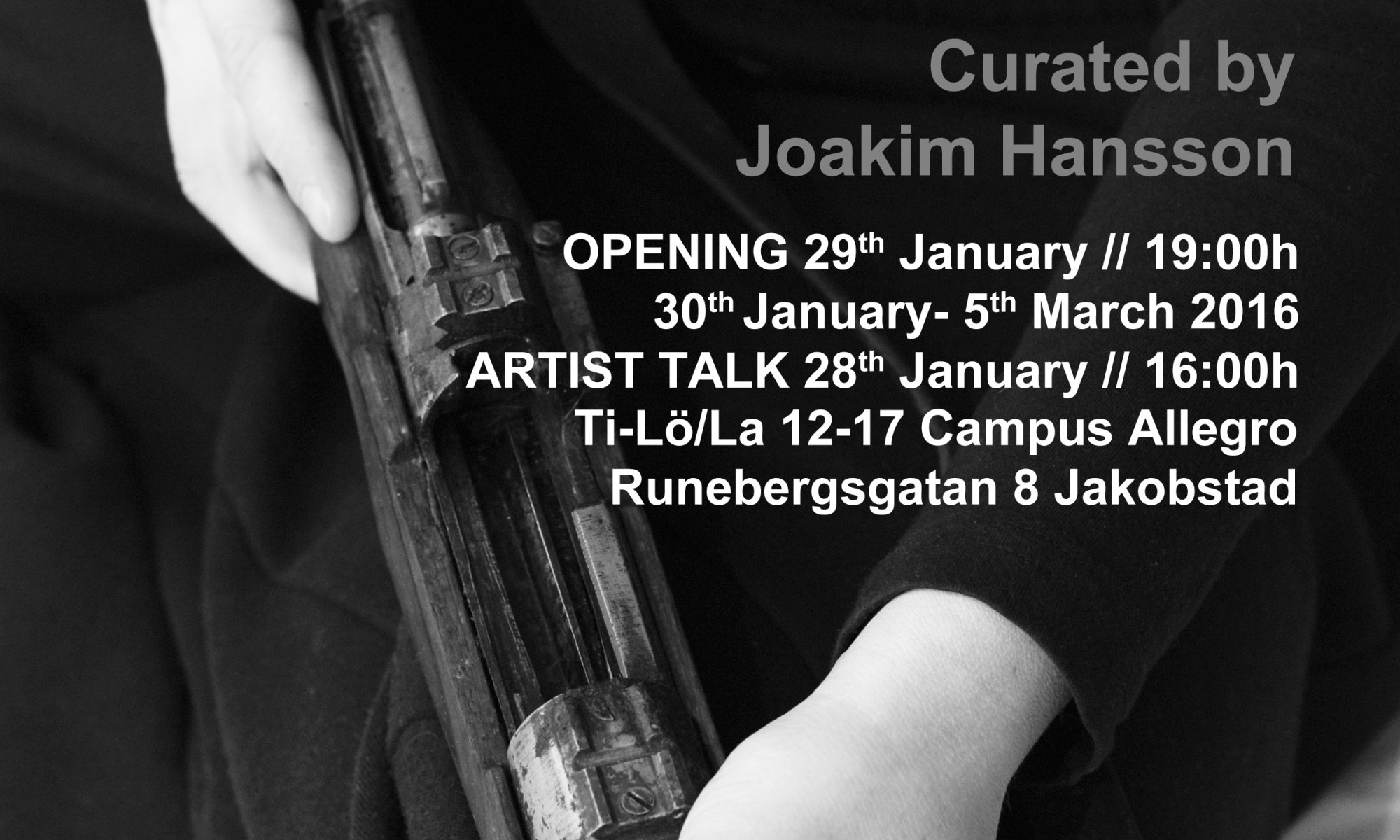 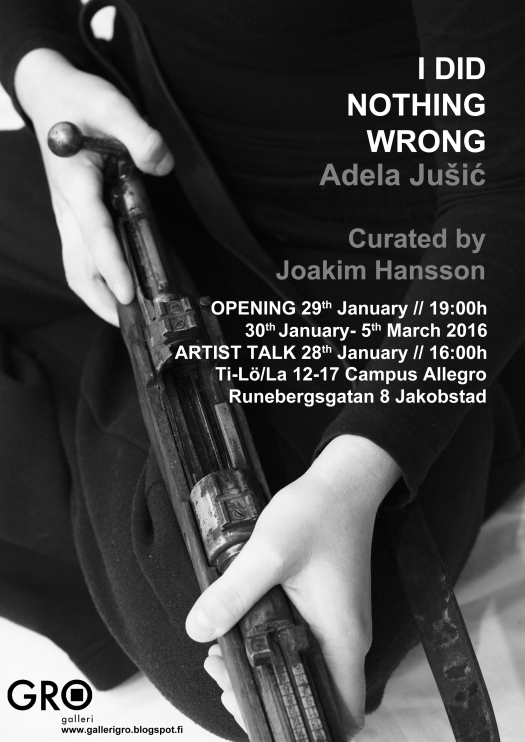 Jonathan Blackwood – Without Pity or Sentiment : Conflict and the Art of Adela Jušić

This exhibition of Adela Jušić’s work brings together key pieces from the last eight years. These are artworks that trace the contours of a national trauma, framed in an intensely personal lens. In a world of seemingly perpetual neo-liberal resource wars and competing propaganda, it is forgivable for a 2016 audience to lose the thread of past conflicts, to have the details of individual battles and atrocities run into one another without differentiation. In an era of the perpetual present, where the unremarkable personal anecdote and life-event is given relentless significance on social media, we could be forgiven for a gentle indifference to an art practice based on personal biography.

But these works act as a sharp corrective to the disinterested and jaded Western gaze, and as a provocation to our blunted sense of empathy.

Born in 1982 in Sarajevo, Adela’s generation, and the ones before her, were and are still profoundly affected by the experience of living through the siege of her home city; lasting 1,425 days from April 1992, to February 1996. Starting with intense personal memories, this body of work gradually moving towards a more universal understanding of the complex lived experience of conflict, and consequences that result. Most recent work uses the experience of war, now twenty years in the past, as a means of critiquing the shortcomings and hypocrisies of Bosnian-Herzegovinian society in the present.

The earliest work on show here is one of Adela’s best-known, The Sniper of 2007. This video details the individual experience of her father, who was a sniper in the Bosnian Army before he was killed in action on 3 December 1992. The piece is a profound reflection on mourning and loss, set in the context of the “losses” of individual lives on a daily basis during the early years of the siege. Individual deaths are intoned in a matter-of-fact way, with lost human lives reduced to impersonal numbers on a list.

Similarly, the video performance Who Needs DRNČ? develops programmatically; the cleaning of her father’s rifle with soot. At one level, this shows the adaptability of people when faced with material shortages and everyday items; there is a poignant intimacy in cleaning a weapon for someone who is no longer able to use it; a challenging ritual of memory, based on the disruption of normality, symbolised by the involvement of children in the everyday chores of a frontline soldier, when not on active service.

Jušić’s work is disarmingly honest and candid, be it dealing with family stories or broader political narratives. When I Die, You Can Do What You Want is another video that focuses on the mixture of the everyday and the distant past, in the last years of an old lady’s life. The subject is the artist’s grandmother; those who have already seen The Snipercan find out more details of the subject of that video in the spoken narrative.

We are left with the impression of a fiercely determined and intelligent woman whose life was marked firstly by the National Liberation War in Yugoslavia (1941-45); broader memories offset by humdrum recollections, half-forgotten arguments, the joys and disappointments of children and grandchildren, the revelation of long-nurtured opinions on people and family property; the memories of two wartimes and a long, quiet struggle in a patriarchal peace. It is nothing less than a portrait from all angles; we see the old lady’s face in many different expressions as the artist herself colours her hair, and acts as a silent witness in the film.

If the works to 2011 deal closely with family and immediate family experience, then since then there has been a wider view employed, to try and illuminate the place of these narratives in local and international geopolitics and contemporary turbo-capitalism. Ride the Recoil of 2012-13 is a polemical installation that effectively challenges the commodification of war experience as entertainment by the gaming industry. 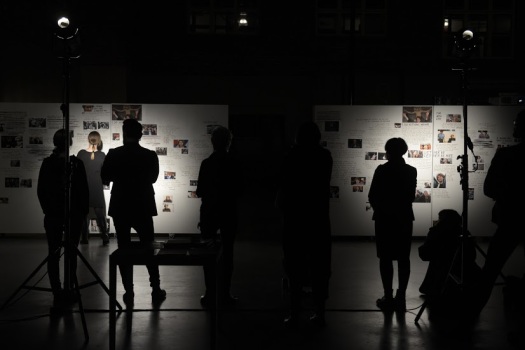 In Ride the Recoil, we are confronted with a series of paintings of a little girl, in red shorts, taken from a site on top of a Sarajevan building, from where snipers used to operate. These works are related to the video game Sniper : Ghost Warrior 2. One scenario in this game is set in Sarajevo in 1993, with the player cast as part of a “crack American team” sent in to neutralise a fictional warlord named “Marko Vladić” (clearly based on the real-life Ratko Mladić). Particularly difficult to watch is the callous gaming instructions on how a player can kill more effectively, with a robotic female voice instructing the gaming sniper on how to make the most of their shot. This is offset by instructions from the artist to the viewer, on how to avoid snipers, based on her wartime experiences.

Of course, the scenario of the video game is at variance with the historical reality; 1993 was the worst year of the siege of Sarajevo, characterised by spiralling violence and atrocity, counterpointed by repeated gruesome blunders in the response of the international community. The idea that a “crack American team” would have been sent to Sarajevo in that year, let alone be able to influence events, is simply laughable.

Nevertheless, profit rather than realism commands the attention of the game’s designers, who remained completely unrepentant. The callousness of the contemporary imagination, the derivation of cheap thrills from suffering and murder, the sociopathic profiting from the painful lived experiences of conflict, are indicted ably here. 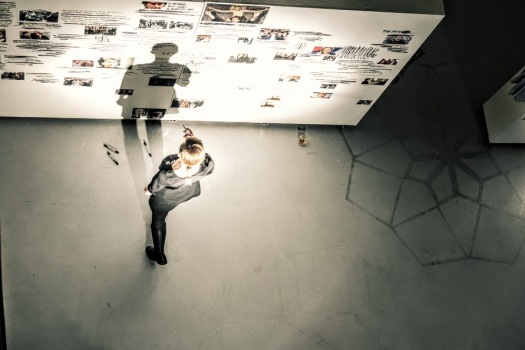 The most recent work, Silk Lavender Shirt, is a durational performance dealing with the consequences of the 1992-95 conflict, for some of the key actors involved; in this case, Biljana Plavšić, a key figure in the Pale regime of Radovan Karadžić. Plavšić, on the basis of a subsequently retracted “confession” and, it is suggested, on the basis of her academic past as a biologist, received eleven years for her crimes, of which only eight were actually served.

This sentence considerably shorter than for many in a leadership role in Republika Srpska during this time. This work seeks to present the facts of Plavšić as a woman, in order to allow the audience to engage and form their own conclusions on the basis of court evidence, statements and photographs. In this work, the artist unveils the subject as providing a bogus “scientific” rationale for the attitude of the Pale regime towards Muslims, as somehow being defective genetic material; simply, a kind of latter-day fascism.

Four key strands underpin the work Adela Jušić. As will be seen, these are personal biography; conflict and the politics of conflict, a steely commitment to feminism and institutional critique, and a practice based on collectivism and solidarity. The continuing appeal of these works, however, is much greater than the sum of these parts. Taken as a whole, these works mark a reflection on her personal development in times of war, which is presented to us without pity or sentiment; recent works suggest a slow processing of the lessons of these early works into a broader dissection of the consequences that that conflict has had.

The best art from BiH has recently made this leap, from reflecting on the war to reflecting on the current post-conflict BiH society as damaged and warped by developments since that war. Seen in this light, there is much evidence that the work presented here is amongst the most compelling being produced anywhere in the former Yugoslav countries, at present.

Jonathan Blackwood is the author of “An Introduction to Contemporary Art in Bosnia-Herzegovina”published by duplex100m2 in Sarajevo, in 2015. He is a lecturer in Critical and Contextual Studies at Gray’s School of Art, Robert Gordon University, Aberdeen. He divides his time between Scotland and Bosnia-Herzegovina.

The exhibition is named after the quote taken from a narrative of artists’ recent long term performance “Silk Lavender Shirt” (https://adelajusic.wordpress.com/silk-lavender-shirt/).

It refers to the lack of individual responsibilities in this world of constant wars and conflicts, that are the result of neoliberal politcs. On the other hand, it also refers to all the victims of such politics.

“I did nothing wrong” is the statment of Biljana Plavšić, the former President of the Republic of Srpska, who was indicted by the ICTY for genocide, crimes against humanity and war crimes. After pleading guilty and statement of repentance, the prosecutors dropped genocide charges against her, and sentenced her to 11 years. She was released after only 8 years served in (as sometimes stated in media) “5 stars jail” in Sweden. Pleading guilty, her reputation of prominent scientist and the fact that she was a women, are considered the reasons for such a light sentence. During her stay in prison in 2005, she published a voluminous memoirs in which she denied her previous confession.